Hager City has its origins with the railroad. The town itself was founded by the Chicago, Burlington & Northern Railroad in 1886. The advent of the railroad in the late 1800s brought a sharp decrease in riverboat traffic as rail replaced boats and barges as the main form of transportation along the river.

The most well-known feature of Hager City is known as the Bow & Arrow formation. Just east of Hager City, you’ll see a set of boulders that the first people to survey the area thought resembled a large bow strung with an arrow and aimed at Lake Pepin. There is an historic marker located along the road that gives details about the rock formation. The rock formation was a well-known landmark and would have been a point of reference for travelers along the Mississippi River for thousands of years. 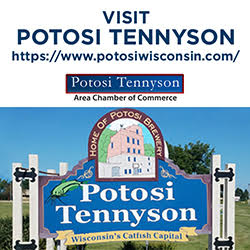